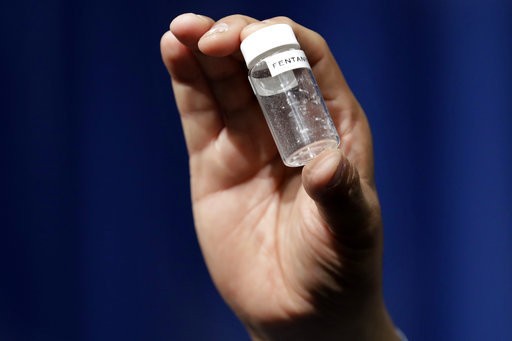 CLEVELAND, Ohio — The number of deaths from opioid overdoses continued to increase in 2017 for Cuyahoga County, according to a report from the medical examiner’s office.

Of a record-breaking 727 fatal drug overdoses in 2017, 492 were from fentanyl, an opioid used as pain medication, and 191 were from carfentanil, a derivative of fentanyl which is about 100 times more potent.

The number of fentanyl deaths went up about 23 percent from 2016, and the number of carfentanil deaths more than tripled — going from 54 to 191.

The first detection of carfentanil in Ohio was in 2016. It is commonly used as an animal sedative. Here’s what else to know about it.

Though the number of deaths from carfentanil and fentanyl both rose in 2017, both rates dropped significantly around August of last year and are currently in decline, according to monthly statistics from the report.

“This is a human tragedy,” Cuyahoga County Executive Armond Budish said in a news release. “This crisis impacts our services in many different ways from our jails to the number of children in foster care. We will continue to attack this epidemic through treatment and prevention. And we have filed a lawsuit to hold those pharmaceutical companies accountable for the damage they have caused.”

Fentanyl surpassed heroin in 2016 as causing the most fatal drug overdoses in the county. This year, the number of fatal deaths from heroin decreased from 240 to 176, which is about 25 percent.

The total number of deaths from drug overdoses in the county went up nine percent from 2016 to 17. The increase in fatal overdoses is much lower than the 80 percent spike between 2015 and 2016.

In a news release about the report, officials said several factors appear to have contributed to slowing the rate, including “reduction of carfentanil in the illicit drug supply, the increased availability of naloxone, addiction treatment, and prevention education.”

Medical examiner Thomas Gilson was not available Monday to comment on the report.

The report also tracked the use of naloxone, which is used to treat the effects of an opioid overdose and can prevent deaths. According to the report, the number of saves from police and Project DAWN naloxone distribution went up from 560 to 875.