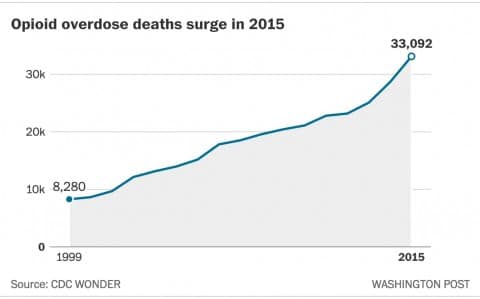 Opioid deaths continued to surge in 2015, surpassing 30,000 for the first time in recent history, according to CDC data released Thursday.

That marks an increase of nearly 5,000 deaths from 2014. Deaths involving powerful synthetic opiates, like fentanyl, rose by nearly 75 percent from 2014 to 2015.

Heroin deaths spiked too, rising by more than 2,000 cases. For the first time since at least the late 1990s, there were more deaths due to heroin than to traditional opioid painkillers, like hydrocodone and oxycodone.

“The epidemic of deaths involving opioids continues to worsen,” said CDC Director Tom Frieden in a statement. “Prescription opioid misuse and use of heroin and illicitly manufactured fentanyl are intertwined and deeply troubling problems.”

In the CDC’s opioid death data, deaths may involve more than one individual drug category, so numbers in the chart above aren’t mutually exclusive. Many opioid fatalities involve a combination of drugs, often multiple types of opioids, or opioids in conjunction with other sedative substances like alcohol.

In a grim milestone, more people died from heroin-related causes than from gun homicides in 2015. As recently as 2007, gun homicides outnumbered heroin deaths by more than 5 to 1.

These increases come amid a year-over-year increase in mortality across the board, resulting in the first decline in American life expectancy since 1993.

Congress recently passed a spending bill containing $1 billion to combat the opioid epidemic, including money for addiction treatment and prevention.

“The prescription opioid and heroin epidemic continues to devastate communities and families across the country—in large part because too many people still do not get effective substance use disorder treatment,” said Michael Botticelli, Director of National Drug Control Policy, in a statement. “That is why the President has called since February for $1 billion in new funding to expand access to treatment.”

Much of the current opioid predicament stems from the explosion of prescription painkiller use in the late 1990s and early 2000s. Widespread painkiller use led to many Americans developing dependencies on the drugs. When various authorities at the state and federal levels began issuing tighter restrictions on painkillers in the late 2000s, much of that demand shifted over to the illicit market, feeding the heroin boom of the past several years.

Drug policy reformers say the criminalization of illicit and off-label drug use is a barrier to reversing the growing epidemic.

“Criminalization drives people to the margins and dissuades them from getting help,” said Grant Smith, deputy director of national affairs at the Drug Policy Alliance. “It drives a wedge between people who need help and the services they need. Because of criminalization and stigma, people hide their addictions from others.”