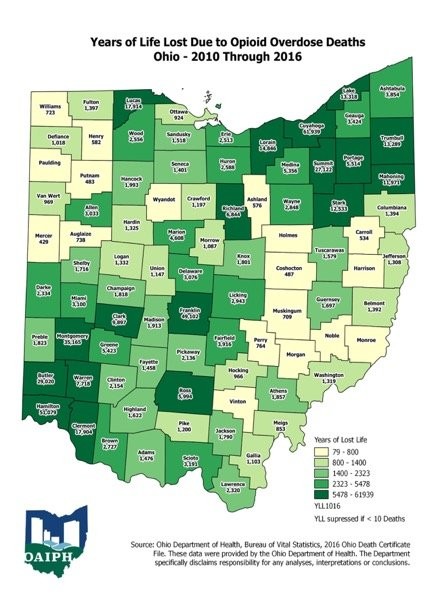 CLEVELAND, Ohio – Ohioans lost more than a half-million years of life due to fatal opioid overdoses from 2010 through 2016, according to an analysis by the Ohio Alliance for Innovation in Population Health.

On average, the preventable overdose deaths knocked almost 40 years off the lives of the 13,059 Ohioans who died, leaving holes in the lives of their families, communities and the economy.

In 2016 alone, the losses, mainly from heroin and fentanyl, were so staggering that they lowered the life expectancy of an average Ohioan by more than a year.

Sharing the information in this way helps us to understand the economic and social costs to each of our communities from this problem, Rick Hodges, director of the alliance (OIAHP), said Thursday.

Similar calculations are often done to determine the “burden” a disease or injury has on society.

The lost life from opioid overdoses during the seven-year period amounted to more years than Ohioans lost to heart disease and just slightly less than from cancerous tumors during the same time.

Opioid overdose deaths also added up to more years of life lost from all suicides and homicides in the Ohio from 2010 to 2016.

The losses from opioid overdose deaths nationally has shortened the expected lifespan in America by more than two months, Randy Leite, dean of Ohio University’s College of Health Sciences and Professions.

“That’s the real cost of this,” he said. “It’s a picture of how much are losing…. Years of working, years with children.”

Ohio’s southwest and northeast regions, along with its more populated metro areas, have been hardest hit by opioid overdose deaths and those areas have experienced more years of lost life.

In Cuyahoga County, opioid overdose fatalities during the seven-year period amounted to 61,939 years of life loss.

The number of fatal drug-related overdoses continued to increase in Cuyahoga County to 727 in 2017, according to the information the Medical Examiner’s office released earlier this week. The majority of the deaths involved fentanyl, carfentanil and heroin.

While a report can quantify the losses in numbers, we have to remember “each of those lives had value,” Scott Osiecki, CEO of the Cuyahoga County Alcohol, Drug Addiction and Mental Health Services Board said.”We are missing employees, mothers, fathers and even potential parents.”

Osiecki said though the losses are enormous, as a community we need to remember that with support people who currently are dealing with the disease of addiction can get better and live those years of life.

“We have to give people a better opportunity to recover,” he said.