Even in best-case scenario, opioid overdose deaths will keep rising until 2022

Even in best-case scenario, opioid overdose deaths will keep rising until 2022

In the nation’s opioid epidemic, the carnage is far from over.

A new projection of opioid overdose death rates suggests that even if there is steady progress in reducing prescription narcotics abuse nationwide, the number of fatal overdoses — which reached 47,600 in 2017 — will rise sharply in the coming years.

By 2022, such deaths would peak at about 75,400, and begin to level off afterward, according to the forecast. 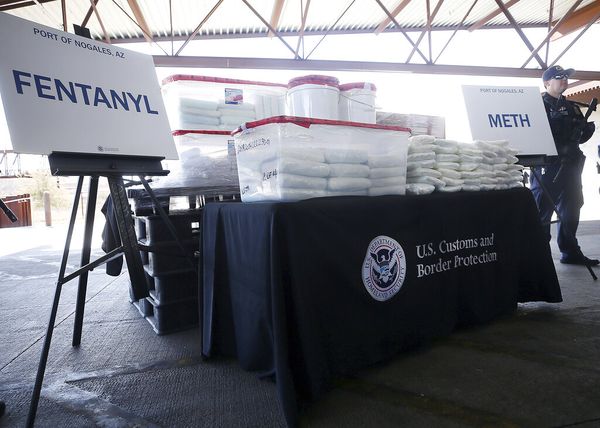 A display of the fentanyl and meth that was seized by Customs and Border Protection officers over the weekend at the Nogales Port of Entry is shown during a press conference on Thursday, Jan. 31, 2019, in Nogales, Ariz. (Mamta Popat/Arizona Daily Star via AP) (Mamta Popat / Arizona Daily Star)

That’s the rosiest scenario. Under conditions that are only slightly less optimistic, the U.S. could have 81,700 opioid overdose deaths per year by 2025.

If the supply of prescription painkillers stops declining and there are other setbacks, researchers predict that yearly opioid overdose deaths could rise as high as 200,000 per year by 2025.

The opioid epidemic “is not finished growing,” said Jagpreet Chhatwal of Harvard Medical School and Massachusetts General Hospital, who led the research. “It’s far from over. And it’s far from moving in the right direction.”

Almost two decades after the widening use of prescription painkillers began to fuel an epidemic of addiction, opiates kill an average of 130 people a day in the U.S., according to the Centers for Disease Control and Prevention.

The driving force of the epidemic has changed. These days, an increasing proportion of overdose victims first got hooked on street drugs like heroin. And since 2016, the explosive growth of fentanyl — an illicit opiate that is highly lethal — has worsened the epidemic.

Meanwhile, many Americans who were first exposed to opiates by prescription have continued to misuse the drugs over many years, said Dr. Donald Burke, who studies the American drug epidemic at the University of Pittsburgh and was not involved in the new research. Until these people either are treated or die of overdoses, they form a “reservoir” of potential victims for the spiraling epidemic, he said.

The new modeling effort, published Friday in the journal JAMA Network Open, finds that slowing the epidemic’s upward trajectory before 2025 will require broad-based action, and more than a bit of luck.

The mathematical models that suggest a leveling off of opioid deaths by 2022 requires, first, that medical and public health professionals continue to drive down the numbers of Americans who get their first taste of addiction from legitimate pharmacy prescriptions They also assume that fewer Americans will start on the path to addiction with an illicit street drug such as heroin, or that successful treatment for such addictions will surge.

Finally, the scenario assumes that progress in fighting the opioid epidemic won’t get blown up by some unforeseen trend, such as the appearance of a new and more lethal drug. In a market where illicit drugmakers are richly rewarded for introducing new products, narcotics such as the synthetic fentanyl — more addictive or more lethal than opioids already on the market — can appear seemingly out of nowhere.

Chhatwal said reversing the surging epidemic of opioid drug deaths will not be fast and it will not be simple. “Bending the curve” will likely require a multi-pronged effort that includes limiting the supply of prescription painkillers that get into patients’ hands, providing more and better treatments for the addicted, increasing the use of overdose-reversal agents like Narcan, and shutting off the flow of heroin and fentanyl pouring into the country.

“None of these interventions alone will have a substantial impact,” Chhatwal said. His work suggests that even if doctors and pharmacists cut off all prescriptions of narcotic pain relievers — a far more radical step than is likely— overdoses would continue to mount until 2025, and possibly beyond.

Burke cautioned that the study’s assumptions about drug users’ behavior are “at best guesswork” and that the results “must be interpreted with caution.”

“While it is possible that (the epidemic’s) stabilization will occur sometime in the next decade, the U.S. has experienced four decades of exponentially increasing overdose deaths, so stabilization in the next two to seven years may be more of a hope than a scientific reality,” he said.

For Georgiy Bobashev, a biostatistician at RTI International in North Carolina, the new model leaves many questions unanswered. As health experts struggle to clarify what measures work best to avoid overdoses, studies that forecast the epidemic’s growth have limited value.

“But we need more modeling,” said Bobashev, who was not involved in the research. “We cannot afford to wait till we get perfect data. When we have such a crisis of this magnitude, we need as much analysis and as many forward-looking models as possible.”